A Matter of Life and Death

A Matter of Life and Death begins after you complete Count Reuven’s Treasure and then make your way to The Bits to speak with Triss and her hideout. She lives in a crooked house to the east of Hierarch Square. 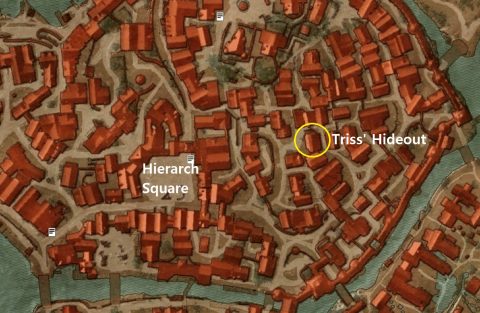 Knock on the door of the odd house and the landlady will let you int. Head upstairs to Triss’ room and have a chat with her. She’ll tell you that she received a letter from one of Lady Vegelbud’s servants. The lady states that she will financially support the escape of the witches and mages from Novigrad but would like a favor in return. Triss wants to meet the servant but is understandably worried that it might be a trap.

Make your way to the fish market and use your Witcher senses to find the servant. He’ll be wearing a blue tunic and have a lot of keys hanging from his belt. Talk to him and tell him the passphrase. He’ll ask you to follow him.

Along the way you’ll be ambushed by Bandits. Take them out and then Triss will arrive. She tells you that the Bandits were working for the Witch Hunters. The Servant will then tell you that the Lady’s son Albert Vegelbud has starting studying alchemy and she’s worried the Witch Hunters will track him down. Triss and Geralt decide it would be best if he got out of Novigrad along with the other witches and mages.

Lady Vegelbud has organized a masquerade ball to act as a distraction while Albert makes his getaway. You’ll need to play the part so go see the Elihal at his tailor shop and buy a Fox Mask for Triss and a Mask for yourself. You can also purchase other elegant outfits here if you don’t have one already.

Return to Triss and give her the Mask. Once you’re ready you’ll head with Triss to the ball. The guard at the gate will tell you that the Lady will be wearing a parrot mask. As you enter the estate you’ll be met by a couple of people. One man mistakes Triss for someone else and one of Triss’ old acquaintances who refuses help.

As you enter the main courtyard turn to the right to see a Gwent Tournment being played. If you want to join in speak to the Croupier. You’ll play three rounds with a Gwent Card awarded to the winner of each round. If you lose you can try again. Upon winning the third round you’ll be given the Dandelion Gwent Card.

Wander around the courtyard until you find the Lady. You may run into a few familiar faces along the way. The Lady will tell you that her son is wearing a Panther Mask. Keep looking around until you find him. Talk to him and he’ll tell you to meet him in the hedge maze once the fireworks start.

Triss will wait with you at a spot nearby where you can have a talk with her along with some wine. During the interaction you’ll have a timed opportunity to kiss her. If you want to romance Triss than you must kiss her at this point. Otherwise she will leave after the following quest. 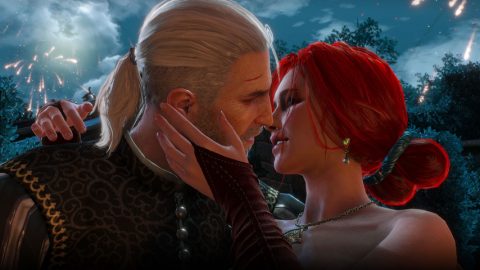 When Albert arrives you’ll swap masks with him to trick the Witch Hunters. While you make your way through the hedge maze you’ll be attacked by Witch Hunters. Defeat them and make your way out of the maze. You’ll find Albert and Triss in the stables and Triss will hand you back your weapons. The three of you will ride off and the quest will conclude.