High Stakes is a secondary quest in Novigrad where you’ll play Gwent for a large reward. The entry fee is 1000 Crowns and you’ll a strong deck before you’ll be allowed to play.

Finish the other Gwent quests to get more cards before considering playing in this tournament. Once this quest begins you can not leave the area or the quest will fail. You don’t need to win all the games to complete the quest but you will miss out on some rare leader cards if you lose.

Read the notice board near St. Gregory’s Bridge to get access to this quest, then head to the Passiflora and speak to the Scribe to sign up for the tournament.

Before the matches begin you’ll have a chance to talk to the other players. Most notably you’ll want to talk to Sasha as you’ll be working with her later.

Your first opponent is Bernard Tulle. He uses a Northern Realms deck but he doesn’t seem too difficult to beat. Your reward for winning this match is the Foltest: Steel Forged Gwent Card which can scorch enemy seige units. 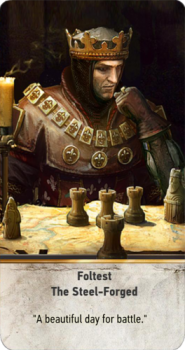 After the match Sash will approach you and tell you that she has a plan to get the prize money no matter what happens. You can agree to see what she’s up to or stay out of it.

The second opponent is Sasha and she’s the toughest of all four opponents. She plays a very strong Nilfgaardian deck with lots of spies, decoys and scorch cards. When you defeat her you’ll be given the Emhyr var Emreis: The Relentless Gwent Card which can draw a card from the enemy discard pile. 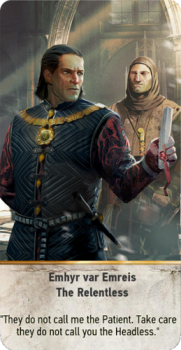 Your third opponent with be Finneas. He uses a Scoia’tael deck. Once you defeat him he’ll be so enraged that he’ll start a fist fight with you. Once you defeat him you’ll be given the Francesa Dindabair: Queen of Dol Blathanna Gwent Card that can scorch enemy close combat units. 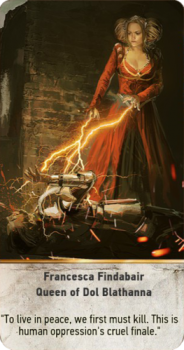 The final match will be played against Count Tybalt with his Monster deck. I didn’t find him too difficult to beat. Try to draw out his muster cards on a round you intend to lose and then beat him in the other two. When you win you’ll be given the Eredin: Bringer of Death Gwent Card that restores a card from your discard pile to your hand. 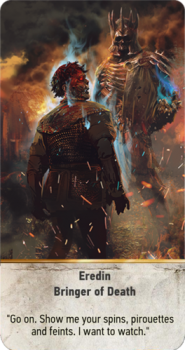 Once the tournament ends the Scribe will announce that the prize money has been stolen. Sasha assures you that she didn’t steal the money but offers to work together with you to catch the thief.

She’ll talk her way past the guard on the top floor so you can use your Witcher senses to examine the scene. On the balcony you’ll find a bolt with a rope attached to it. Someone lowered the money down to the street below.

Head outside to search the street and Geralt will pick up on a scent of cinnamon. Follow the scent to a crate. Sasha will recognize the seal and tell you to meet her at a particular warehouse.

Make your way to the warehouse marked out on your map and meet up with Sasha. The door is locked so climb up the scaffolding at the back of the warehouse and go in through the window.

Inside you’ll find the thief, Bernard Tulle, with a group of men. Fight the men and then you’ll talk to Sasha where she’ll invite you to dinner at the Kingfisher. If you agree you’ll have the chance to romance her. In the morning she’ll leave a note for you on the pillow.

When the quest concludes you’ll be given half of the prize money worth 4500 Crowns.