Once you’ve found and saved Dandelion head to the Rosemary and Thyme. Zoltan will be having a heated discussion with some men out the front. Walk up close enough to join in the conversation. When you say something the leader of the group will decide it’s time to leave.

Talk to Zoltan to find out what’s going on. Apparently Zoltan starting trading Gwent cards but there’s some tough competition. He asks you to help him find 3 cards, Fringilla Vigo, Isengrim and Natalis. Then he gives you the location of a pawnshop owner named Zed. 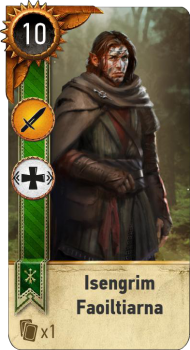 Make your way to Zed’s house and knock on the front door. There’s movement inside but no-one is answering. Walk back downt he steps and then climb up the ladder. Climb up a second ladder and then jump over a small gap between the buildings to an open door. Go through and make your way into Zed’s house.

Drop down to the lower floor and you’ll find Zed’s body. Use your Witcher senses to examine the scene and then walk downstairs. Two bandits are searching for Zed’s ledgeer. Kill them and loot their bodies to find the Isengrim Faoiltiarna Card. You’ll also find the Key to the front door.

Use your Witcher senses to find some claw marks under the stairs. Cast Aard to break the boards and pull out the chest. Inside you’ll find the Ledge of Income and outlays. Head back to Zoltan to give him the news. 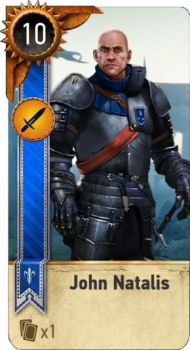 Head to The Golden Sturgeon to find the thugs from before. Ravik is being held captive by them and they offer to release him and give you the card if you can beat them at Gwent. If you refuse to play or if you lose they’ll kill him.

Win the game of Gwent and Ravik will be spared but a fight will break out regardless. Once you’ve defeated them Geralt will insist on being given the John Natalis Card as agreed. 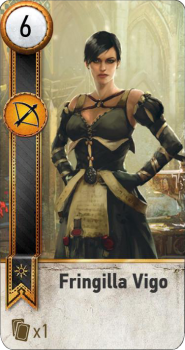 The final card is held by Caesar Bilzen. Zoltan will agree to help you with this one. Meet Zoltan at Caesar’s house and you’ll end up having dinner with him. During the conversation you’ll be asked to go upstairs to find some more alcohol. While there use your Witcher senses and follow the clues to find the rare Fingilla Vigo Card among his collection of other rare items.

When you get back down two of Cleaver’s men will appear. If you kill them Caesar will thank you for your help and then state that he’s going to leave the city.

Now that you have the 3 rare cards go with Zoltan to find the client. One of the thugs, Duke, from earlier will have killed the client and has taken the money. Zoltan will deal with the other thugs while he tells you to chase down Duke.

Make your way up a tower and then down another tower into the sewers. There’s actually no time limit for this quest so you can take your time. In the sewers there’s only one path to take so you can’t get lost. Take out the Drowners and then use Aard on a breakable wall.

On the other side you’ll find Duke lying injured after being attacked by Drowners. Talk to him and Geralt will take the money. You can leave him to his fate or kill him. Either way, you’ll be automatically taken back to Zoltan. He agrees to let you keep the money or the three rare cards. If you play Gwent you’ll definitely want to keep the cards.