Lord of the Wood

To begin this quest you can read the Notice Boar at either Cunny of the Goose or Farcorners. Make your way into the Cunny of the Goose Inn and talk to the halfing Brean. He started a lumberjack business but something was killing off his workers.

Talk to one of the witnesses sitting on the other side of the Inn. He’ll tell you he heard a wolf howling but after he went to grab a weapon he only found dead bodies upon returning.

Make your way out to the Logger’s Hut in the forest and examine the wagon’s tracks. Follow them along the road until you find the wagon. Examine the area to find out a fight took place. You’ll need to find all the clues, Sword, Claw Marks on the stone and two sets of prints leading to two dead Dwarves. Once you’ve examined everything Geralt will determine it’s a young Leshen.

To draw out the Leshen you’ll need to destroy it’s totem. It should be marked by a murder of Crows but there are many birds in the forest. Make your way to the eastern marker and examine the tree to find the Totem. Destroy the Totem and the Leshen will appear. 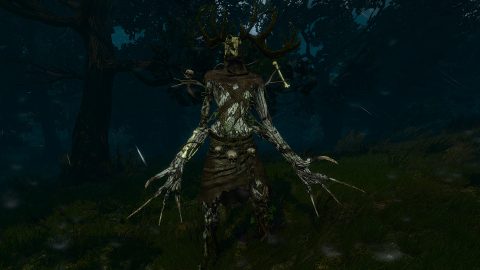 The Leshen will disappear and reapper next to you, shoot tangling roots at you and summon wolves. Try not to get ensnared in the roots and use Ignii when you get close. After it’s been killed loot the body for the Leshen Trohpy and a steel sword called Black Unicorn.

Return to the Cunny of the Goose Inn and speak to Brean to complete the quest.