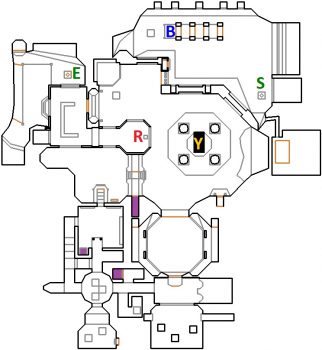 From the Start immediately turn around to kill the Chaingunner positioned behind you. Go through the arches one by one to release enemies. Eventually you’ll make it all the way to the Blue Key. Grab it, open the door to the left and hit the Switch to lower the blue bars. When you go through the wall ahead will raise up, setting loose the Revenants. 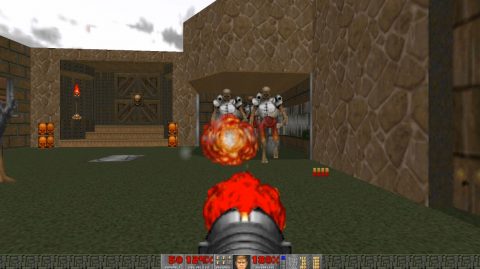 Quickly turn around because Arachnotrons will be released behind you. Go back through the blue bars. The Yellow door is in front of you but you don’t have the key yet.

Make your way past the gazebo with the Yellow Key on a pedestal and go through the opening to the south. Chaingunners will appear on ledges around the edge of the room and a Baron of Hell in the lift to the south. Quickly kill the Baron of Hell with a BFG blast and take the lift down.

Clear out the Demons and explore the corridors to the west. Press on one of the dead ends for Secret 1 with Rockets and Stimpaks. When you enter the small circular room to the west four Hell knights will be alerted. Take them out, enter the room to the south and press the Switch. This lifts up stairs so you can get to the room to the north.

Head up the stairs and grab the Rocket Launcher. To get the Blue Armor walk up the steps to the outside and turn around. The pedestal with the armor will lower. Quickly run back and pick it up. This is Secret 2.

Head up the stairs to the outside room and press the Switch. This lowers some stairs under the wall so you can get back to the area with the Yellow Key. Watch out for the Arch Vile that spawns in the center. Grab the Yellow Key and many other enemies will spawn.

Quickly make a dash for the Yellow Door and go inside. From here you can hold your ground and take out all the enemies as they try to get through the windows.

For Secret 3 go back to the stairs under the wall. Press on the sides to lower them down. One side has a Rocket Launcher and the other has an Invisibility sphere. 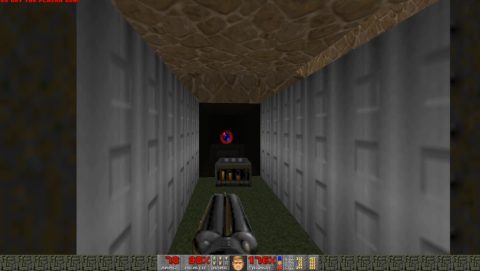 Press on the Red Face Button to open it up and then press the Green Button behind it. Go back through the Yellow Door. A door should have opened up behind it leading to the outside. Follow the fence around but watch out for the enemies that get released as you make your way towards the Exit.