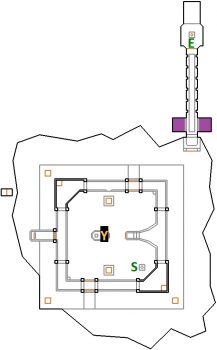 This is a small level where you Start in an enclosed courtyard. First kill the Mancubi and two lifts will be revealed, one to the north and the other to the south. Take one of the lifts up and clear out the Revenants and other enemies.

Make your way around to the eastern side for a Megasphere. Run off the gap to grab the Yellow Key. When you grab it an Arch Vile will start teleporting between two cages. Just focus on one cage and shoot rockets at it until the Arch Vile is dead.

Go back up the lifts and open the Yellow Door. Hit the Switch and a Hell Knight will spawn in. Kill it and then make your way to the passage to the north.

Make your way to the Exit room but don’t go in yet. Turn back around and two Secret rooms will have opened up. They both count as Secret 1. Kill the Chaingunners and pick up the loot before heading through the Exit.