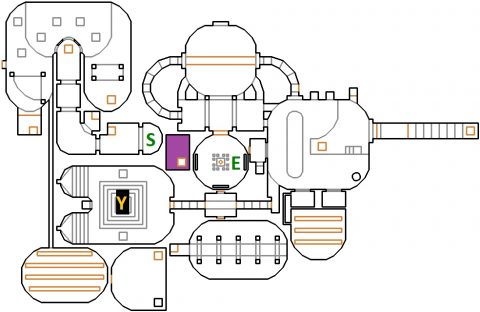 NME is another small level but it has a few tricky sections. From the Start clear out the enemies in this small curved corridor and grab the Plasma Gun at the end. When you get near to it enemies will spawn in behind you. Take them out and then go through the teleporter.

Take the teleporter back and then go through the teleporter next to the Switch you flipped earlier. Quickly run off the walkway and hide in one of the side corridors. From here you can clear out the enemies in the courtyard. 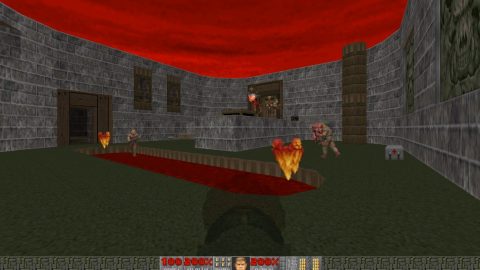 Make your way down the passage to the southwest but watch out for the Imps that lower down on a lift on either side. In the room to the west you’ll find the Yellow Key in a blood pit guarded by an Arch Vile and other enemies.

Head back to the small courtyard and climb up the steps to the central walkway. Open the door to the east and go through. Before you get to the end you’ll be teleported to a walkway. Use the Plasma Gun to quickly take out the enemies in front of you and go through the next teleporter.

You’ll be taken to a room with an Arch Vile and other enemies. Use the BFG to quickly kill them before you take too much damage.

Head up the curved stairs to the north of the courtyard. Follow the walkway up to the room above. Open the door to the south and head through the level Exit.