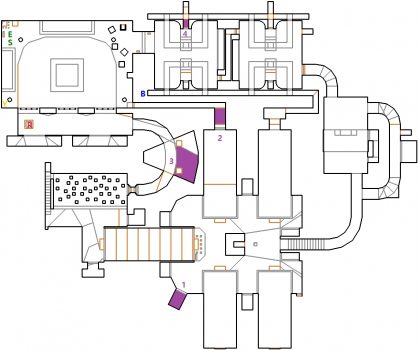 The Start location is also the Exit but you’ll need the Red Key before you can access it. Head to the south west corner of the room for the Yellow Key and then hit the Switch to open the door to the east.

Take out the Gunmen and then go through the narrow door to the east. This leads out to another section of the steelworks with many more Gunmen.

Once the room is clear head out through the Yellow Door to the east. Make your way up the steps and kill the Gunmen in the room at the top. Watch out for the Chaingunners in the room beyond the caged off area. 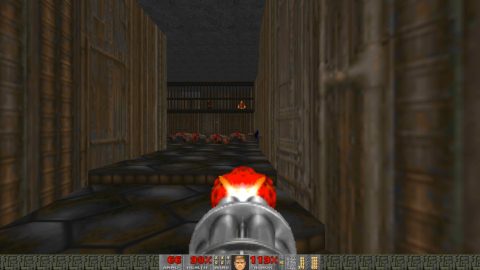 Grab the Backpack from the lava before continuing up the next corridor to the left. This takes you around to the other side of the bars.

Continue down the corridor to the south and clear out the enemies in the room below with the five crushers.

Take the lift up to the crusher immediately to the right (north east) and dash across to the lift on the other side. Take out the Imps in the narrow corridor and pick up the Blue Key at the end.

Ride the lift up to the crusher to the left of the entrance to this room (south east). Shoot the wall at the end to reveal a Button in the wall to the left. Press the Button to lower down a floor elsewhere that lets you get to Secret 3.

Ride the lift up to the north west crusher. Run along the lava and the wall at the end will open. This is Secret 2 with a Light Amplification Visor. If you follow the corridor along to the end it will take you back to the Starting room.

Back in the crusher room pick up the Radiation Suit in the north east corner and then hit the Blue Switch to ride up the crusher to the west.

Take out the Gunners on the other side and head up the stairs. You’ll come to a room with lava floor, pillars and Lost Souls. Navigate your way through it to the other side.

Hit the Green Button to open the wall and then drop down into the room below. Grab the Soulsphere if you need the health. This is Secret 3. The two teleporters in this room take you up to the corridors above. Step into the teleporter on the north side and follow the corridor around to the Red Key. 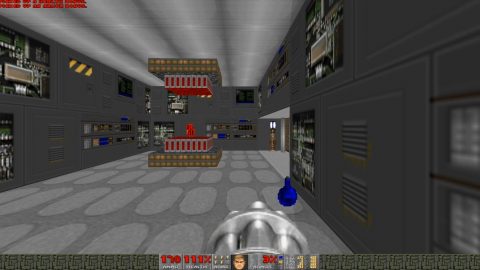 When you grab it the side wall will open releasing enemies. You’ll also notice a Spider Mastermind has been released in the starting room below. We’ll get to that later. Grab the Radiation Suit in one of the side rooms and make your way back to the crusher room. More enemies will have been released down here as well. 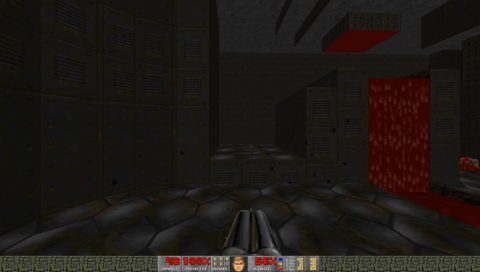 When you’re done exploring head back to the Start room and carefully deal with the Spider Mastermind. you can use the boxes in the corner for cover.

Use the Red Switch behind where you started to raise the red bars so you can get to the Exit.