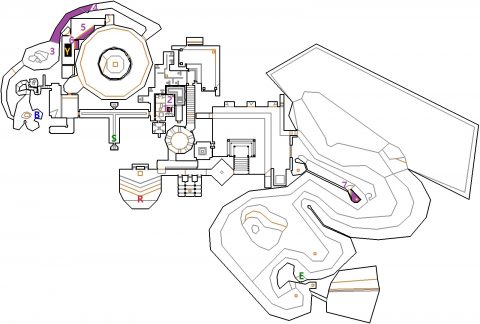 From the Start clear out the enemies in the corridors and then go through the door to the right (east). This takes you to an administration area. Find the teleporter in the north eastern section of this office and go through it.

Turn around to take out the Shotgunner behind you and then clear out the remaining enemies. Walk up the boxes and open the box up the top on the left. Drop down for Secret 1. 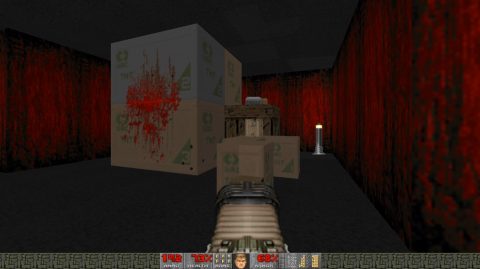 Drop down for Secret 1 with a Box of Bullets. Open the wall to the north and take out the Mancubus on the other side. Press on the brick pillar in the corner behind the Computer Area Map to lower it down. You’ll find a Lost Soul guarding a Health Pack. This is Secret 2.

Ride the lift up to a small room with Chaingunners. Take them out and then kill the Revenant on the other side of the gap behind the BFG. 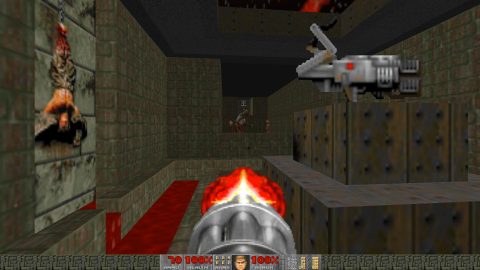 Shoot the face on the wall behind the Revenant to lower down the ledge and then dash across. Go through the silver teleporter which takes you back to the previous area with the red walls.

Go back through the silver door to the office area. A section will now have opened up to the east.

Quickly run up to the blue area and use the BFG to kill the 2 Pain Elementals. Clear out any remaining Lost Souls. Ride the lift up in the corner but immediately jump back down as 3 Chain Gunners will spawn in behind you.

With all the enemies clear you can now ride up the lift and grab the goodies on the ledge above.

Drop down and enter the corridor to the south. Stairs will lift up so you can take them to the circular room above. Hit the Switch on the wall to the left to flatten the walls in the room and release a Pain Elemental and Revenant.

Head down the corridor to the south but watch out for the Chain Gunners. Take the lift up and step on the blue pad. Quickly run back to the safety of the corridor as the wall will open to the south releasing many enemies. 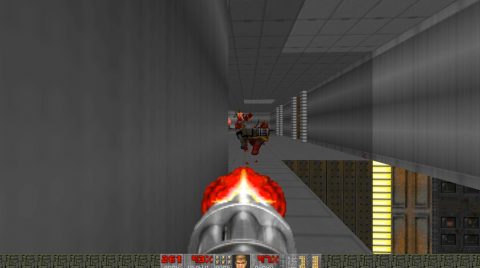 Grab the Red Key from the steps that opened up but watch out for more Gunners being revealed by the blue pad.

Continue along the corridor to the east. Another section of wall will open to the south revealing another room with a Berserk pack and teleporter pad. You don’t have the Yellow Key for the door to the east so step into the teleporter.

This takes you back to the Start but a room will have opened in front of you with a Chaingunner and behind you with a Baron of Hell.

Head down the corridor and this time go left to open the Red Door. Go through and head towerds the next door but quickly turn around to take out the Revenant that is revealed when the wall opens behind you. Go through the newly revealed room and shoot the Switch to open another section to the west.

Take out the Arachnotron and other enemies and then open the wooden door. I like to come in here just to clear out the enemies first because they’l start spawning in one-by-one. 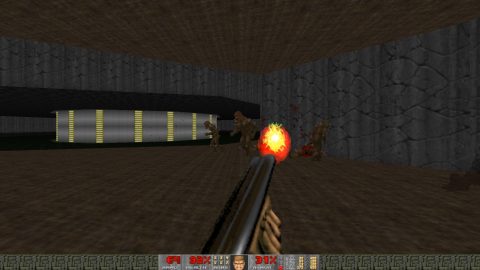 You can do a lap around the slime pool if you want to clear out all the enemies. Once you’re done head back through the wooden door to the previous room and go through the passage to the west.

Follow the passage around and pick up the Radiation Suit along the way. Drop down to a slime pool and grab the Blue Key.

Open the door to the west and follow the passage along to a large lift. This leads out to a lava room. Take out the Imps and then go through the passage to the north for Secret 3 and Secret 4 where you’ll find an Invulnerability sphere. 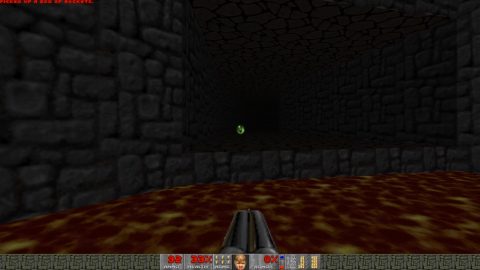 Quickly run through the passage and out the other door back into the circular slime room. Open the door to the interior room and clear out the enemies. When you’ve done a lap around the interior section will lower allowing you to grab the Blue Armor.

Shoot the Button in the small room to the north and a door to the west will open. Kill the Arachnotron, grab the Yellow Key and then open the walls on the left for Secret 5 and Secret 6. One has an Energy Cell Pack and the other an Invulnerability sphere.

Grab the Invulnerability and then quickly open the door to the north west. Go through and you’ll be teleported to the corridor with the Yellow Door. Quickly go through the yellow door, take out the Arachnotron on the steps and Chaingunners up on the ledges before your invulnerabilty wears off.

Drop into the water and run all the way to the end of the canal. You’ll be teleported up to one of the ledges. Drop down and quickly dash towards the south east corner. An Arch Vile and other enemies will teleport in. 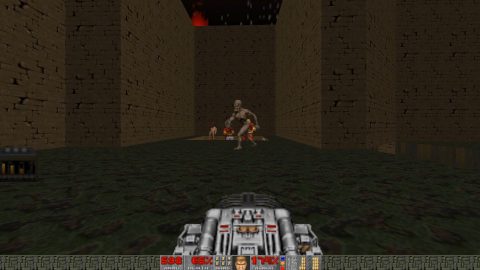 Open the large wooden door to the east and take out the enemies on the other side. Watch out for the Revenant up on the top of the cliff.

Drop into the water and follow the river along to a Pain Elemental and 3 Cacodemons. Take them out and then run back along the river the way you came. You’ll be teleported up to the land.

Go through the teleporter to the south and you’ll end up on top of an island. Drop down one level and take out the enemies. You’ll find a Soul Sphere on this level. 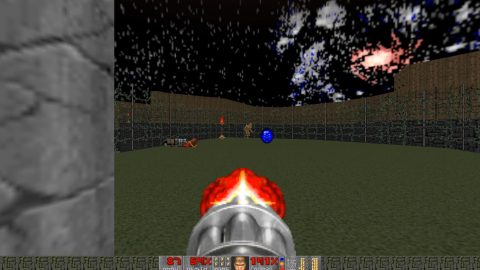 Drop through a gap in the fence and continue down to the water. There is an Arch Vile down here, as well as a Spider Mastermind so you’ll need to retreat and carefully take them out.

Do a lap around to clear out the enemies and then go through the silver teleporter. This takes you back to the start of this area.

Head around to the left for a Rockets and Bullets, otherwise head up the steps to the right.

Follow the path all the way around and activate the crystal. This will lower down the wall. Stand on it to be lifted up. Clear out the enemies on the top wall and then drop through the gap in the fence.

Follow the white path around to a teleporter. Turn around and hit the Exit button to complete the level.

Back: Shipping/Respawning       Next:  Central Processing