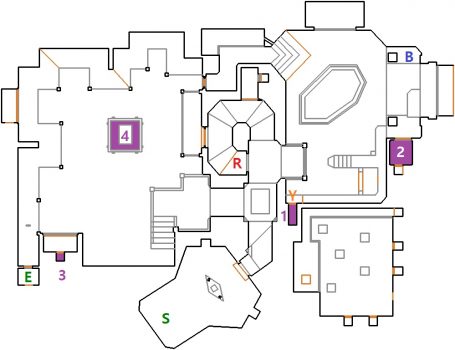 Go back down the steps and then take the corridor out to the west. Clear out all the enemies in this large open area, focusing first on the hit scan enemies and then the Imps. 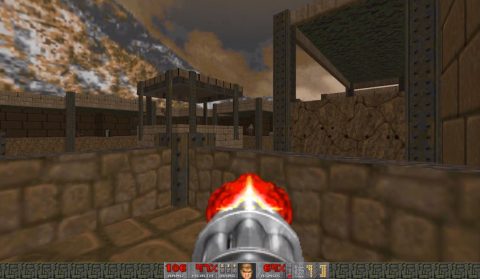 Once the coast is clear go through the Red Door in the north east corner of the courtyard. Follow the corridor around to a large enclosed room. Once again clear out the area but watch out for shooting the far wall. When you do it will open a room in the corridor, releasing Specters and Demons.

When the room is clear of enemies hit the Skull Button on the lower eastern side of the room. The wall to the north will open, releasing Cacodemons, Demons and a Pain Elemental. Retreat to the corridor if you’re finding them hard to deal with. 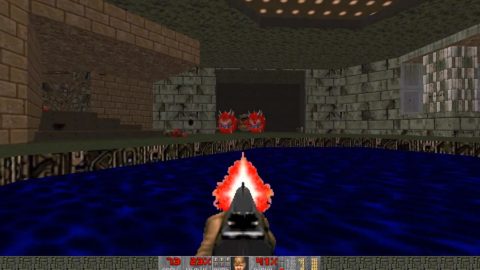 Head back the way you came to the outdoor area. Go up the stairs and back to the main corridor where you began. To make it to the stairs in the large room you’ll need to dash through the window in the room to the west. If you do it correctly you’ll land on the beginning of the steps. 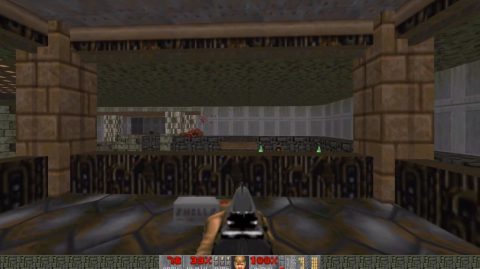 Run around the ledge to the right for the Yellow Key. When you grab it a secret door to the left will open with an Imp and Computer Area Map. This is Secret #1.

Head back along the ledge and dash across to a lower platform for the Blue Key.

Make your way back around to the small room with the window and dash across to the stairs. Head across to the central platform and face the wall to the south. Open it for Secret #2. 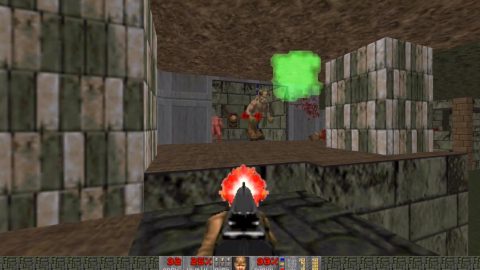 Take the Blue lift down and then go through the teleporter. Head along the corridor for the Soul Sphere. When you grab it the walls to the east will lower. Inside you’ll find 3 Barons of Hell and 2 Hell Knights on little pedestals.

You can try to fight them all if you like but an easier way to deal with them is to hit the Skull Buttons on the walls to open up teleporters and go through them. Do this for all the Skull Buttons and you should telefrag all of the larger enemies.

One of the Skull Buttons lowers a pedestal with the Super Shotgun. When you’re done go through the teleporter in the corner back to the lift in the secret room.

Now that you have all of the Keys make your back through the large open area and up the spiral steps where you found the red key. Go through the Yellow Door.

When you get to the upper ledge Chaingunners will raise up from the central platform. Make your way around and watch out for the Hell Knights and Chaingunners that appear from side rooms.

Press the Switch in the side room with the Hell Knights. Dash across to the ledge with the Chaingunners and open the secret wall behind them for Secret #3 with Blue Armor. 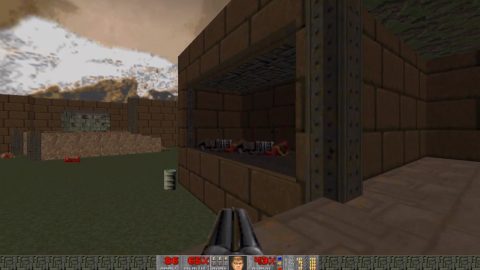 Drop down to the ground and head up the steps. Go up the spiral steps again and turn around to open the side room that had the Specters. This time a small room will be open in the corner with a teleporter. Go through it to be taken to the central platform in the outdoor area where you can pick up the Soul Sphere. This is Secret #4.

Now drop back down and go through the Yellow Door again. This time follow the ledges all the way around to the Exit. Watch out for the Revenant guarding the Exit Switch.