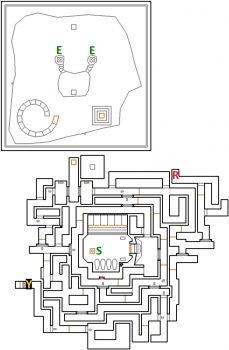 This level consists mostly of a maze. You’ll need to get through it while avoiding the 14 Arch Viles, 12 of them are released once you press the Switch to get out of the Start room.

Doors in the maze are not opened in the normal way. A door will open when you walk past the trigger point which is marked out by a metal strip on the wall. There are two Keys but only collecting one of them is necessary to make it to the Exit.

After exiting the room with the Arch Viles take the path to the right. Follow the maze along to the first door. Open the wall opposite it to find Secret 1. Press the Switch inside and lights on the floor will appear giving you clues to the locations of the keys.

Go through the door opposite the secret. There should now be a yellow light on the floor indicating this is the way to the yellow key. Go through the next door to the south and then make your way east to the Yellow Key.

If you have both keys you can make your way around to either side of the maze exit. Unfortunately the Switch that opens the Yellow Bars is in front of the Red Bars and vice versa for the other Switch. This means you’ll need to unlock one and traverse all the way through the maze to the other side to get through.