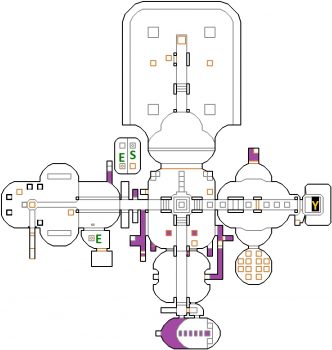 From the Start step forwards into the teleporter and then press the Switch to lower the lift down to the main area. You’ll be at the southern edge of the map. Use the Button by the lift as a hold point. Clear out all the enemies around you as you make your way along the corridor to the north.

Once you reach the intersection in the middle follow the corridor to the left (east). Open the door and enemies will spawn in. Use the BFG to get rid of them quickly and grab the Yellow Key at the end of the passage. 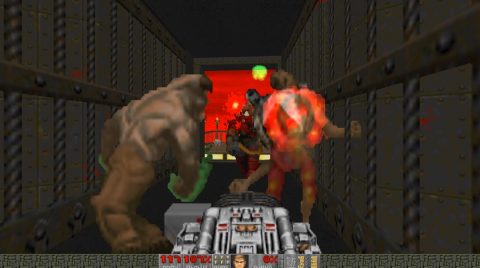 On the way back to the center an Arch Vile will have been released to the north. Carefully take him and the Chaingunners out with Rockets.

There are 19 secrets in this level although some of them are grouped together.

From the start when you take the lift down to the main level head to the north and you’ll see a panel with a lightning bolt symbol on it. Open the wall and press the Switch behind it. this is Secret #1 and opens up a room to the south.

Make your way to the south to the crescent shaped ledge that opened up for Secret #2. The steps leading up to the Megasphere count as Secret #3 to Secret #8.

From Secret #13 you can also dash across to the top of a pillar for Secret #16 with a Medikit. You can also do this from the other side. Either pillar will trigger Secret #16.

Once you have Secret #16 you can drop into the blood pool to the southeast and enter the alcove to the south for Secret #17 with an Invulnerability Sphere.

Once you have Secret #16 two alcoves will open up in the western passage. The northern alcove counts as Secret #18.

From the western room drop down into the higher section of the blood pool to the north and go through the corridor for Secret #19 with a Soulsphere.

Once you’ve cleared out the room to the north step into the teleporter at the end of the walkway and you’ll be taken to a small room with the normal Exit.