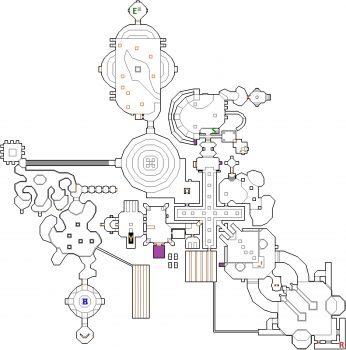 From the Start you can look out a window down to a large slime pit. Head to the west and take the stairs down to the pit. In a cave in the northeast corner you’ll see a Skull Button. Press it to open it up, revealing a room with Blue Armor and Health Bonuses.

Make your way back to the stairs and go through the wall with scratches on it at the base. This is an illusory wall. Follow the path around to Secret #1 with Invisibility and boxes of rockets.

Drop back down to the Start and go through the door to the south. Grab the Computer Area Map and shoot the panel on the right to open it up. This reveals 3 Lost Souls but also opens an alcove on the other side with a Soul Sphere. This is Secret #2. 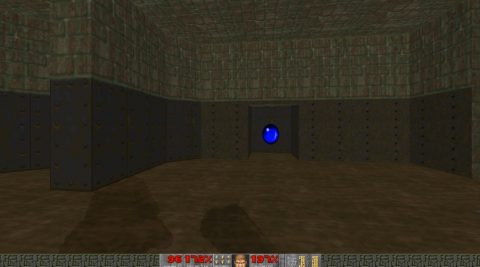 Continue south to a four-way intersection. The room to your left (east) is optional. There’s a few enemies to kill and a Rocket Launcher through a door up the stairs.

From the intersection head down the path to the southeast. Press the two Buttons in the corner of the slime pool and run along the edge of the pool to the west. The wall at the end is an illusion. You’ll find Secret #3 behind it with boxes of rockets.

Drop down to the floor and make your way down one of the passages to the southeast. Open the thin door in the corner of the next room and grab the Red Key. Groups of Mancubus will be released. Deal with them and go back the way you came. The teleporter in the room between the two passages takes you back up to the slime pool.

Head back to the intersection and take the lift down in the south west. Open the banner to the south for a room with Super Shotguns and Plasma Guns.

Press the Skull Button to the west to lower down the wall. Take out the Hell Knights and then open the bookshelf to the south for Secret #4 with Blue Armor and Energy Cells. 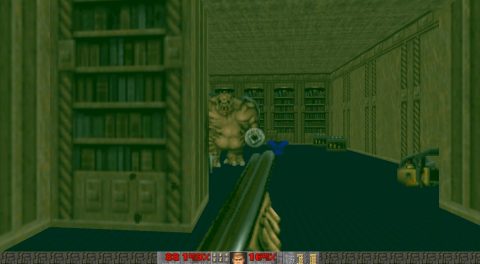 Press the Skull Button and go through to the next section. Press another Skull Button in the next room to lower down the Yellow Key and release a horde of enemies.

Go back and hit the Skull Button to lower the barriers between the rooms. Just watch out for the Revenants waiting for you as you backtrack. Ride the lift back up to the intersection.

From the intersection take the opening leading to the north west. In front of you you’ll see a Red Door. Open it, grab the Soul Sphere and press the Button. A horde of enemies will teleport into the center of the room. 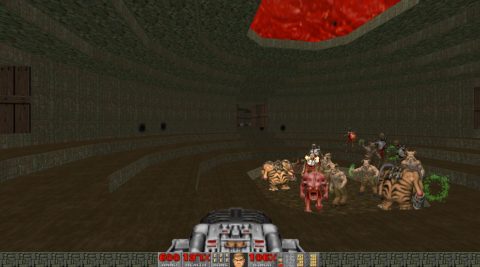 Run around them to let them in-fight among each other and finish off any stragglers. The passage to the north needs a Blue Key so head through the long passage to the west first.

You’ll come to a room with Health Packs and Radiation Suits. This should make the next section quite easy. Grab a suit and clear out the Barons of Hell. Press the Buttons behind in two of the niches to lower down a Backpack and Blue Armor. The third niche has a Skull Button. Press it and then head through the passage to the east.

Press the Skull Button at the end of the passage to open up the door to the south. Clear out the Arachnotrons and grab the Blue Key in the room beyond. This will spawn in a group of Demons, Shotgun Guys, Imps and Hell Knights. Take them out and retreat to the very south for a Megasphere if you need health. The Button here reopens the exit out of the trapped room.

Make your way back down the long corridor to the circular room and north to the Blue Door. Ride the lift down and get ready to take out the Arch Vile that lowers on the first pillar. If he gets loose he’ll teleport all over the place.

Take out the Revenants in the little alcoves, open the Yellow Door and go through the level Exit.