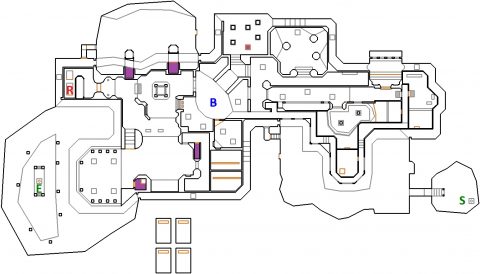 This map consists of a large building surrounded by a bunker. There are two keys, red and blue, but you only need to find one to complete the level.

From the Start head down the stairs to the building and clear out the enemies. Drop into the bunker and do a lap around the entire building to clear out as many of the enemies as you can.

When you get around to the northern side of the bunker you might notice Blue Armor on a ledge. Press on the wall under the green bridge the east of where you see the armor. It will lower down along with the Blue Armor. Quickly run over and pick it up for Secret #1. 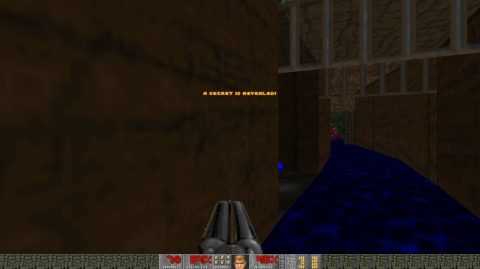 On the north eastern side of the bunker you’ll notice some stairs going up to a door. This is one way into the building. Watch out for the enemies that appear behind you when you walk up the stairs.

When you enter turn left (east) and go up and and down a set of stairs. At the bottom a wall will open on your right releasing 4 Chaingunners. Kill them and flip the Switch behind them.

Head back the way you came and continue forwards. Kill all the Shotgun Guys along the corridor and press the Switch on the left to open the door.

The Red Key can be found in the most western room of the building. Continue west past the room with the Blue Key and find the corridor between the red bars. Dash quickly along the corridor to grab the Red Key at the end because crushers will lower as you run past.

If you’re starting to get low on health head back the way you came and go past the room with the Megasphere. Take the stairs down to the moat section with the pillars and press on the pillar with the blood splatters. It will lift up revealing a teleporter.

The teleporter is Secret #2 but it won’t trigger unless you use the idclip cheat code. The teleporter takes you to the Megasphere in the other room.

By now you’ve certainly seen the Blue Key on a pedestal. Head one room to the west and go up the stairs. From here you can dash across to grab the Blue Key. More enemies will spawn in around the moat so you might want to do another lap to make sure all the enemies are dead.

Go back out to the moat and take the stairs back up to the starting area. Hit the Blue Button on the west side and go back down to the moat.

Take the lift up on the northwestern side of the moat and press the Red Button on the east wall. Drop back down and head to the room between where you picked up the red and blue keys.

Take the stairs up to the south and quickly run through the opening on the east turn. Turn around and get ready to take out a wave of enemies. 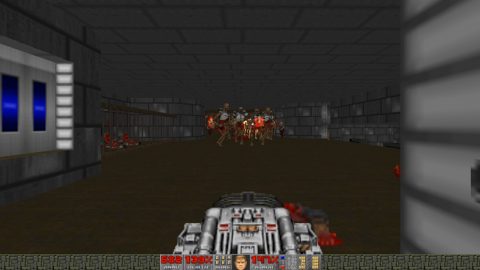 Once the enemies are clear you can focus on getting the final 2 secrets. One wall in the room where you were hiding from all the enemies has a green tinge. Open it for Secret #3.

Secret #4 can be found by opening the green-tinged wall in the southwest corner of the large room. Take the teleporter behind the wall for the secret. When you’re done dash over the moat to the island to the west with the Exit.