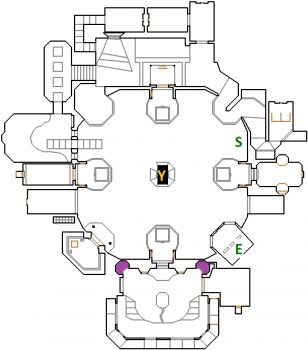 Cyberden is the first of two secret maps and includes 4 Cyberdemons that will be released one by one as you progress with the level. There is only one Exit from this level and it leads to the second secret map, Go 2 It. 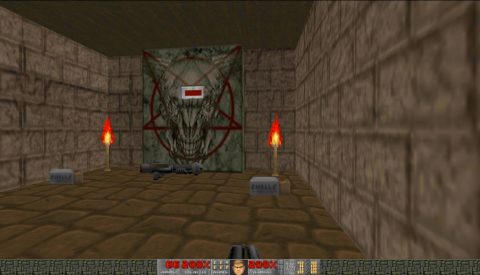 This is the first of four Switches needed to get access to the Yellow Key in the center of the courtyard. Each Switch will release another Cyberdemon.

Make your way back to the courtyard but watch out for the Hell Knoights that have been released along the way. Once you get back to the courtyard you’ll need to deal with the first Cyberdemon. By now you probably have your own method of dealing with it. If you have energy cells strafe side to side and use the BFG to kill it quickly.

Go inside Cyberdemon den #1 and open the door. Press the Button on the wall behind it to lift up the first steps to the Yellow Key. This also opens up access to the next Switch.

Go back through the sunken steps to the west and follow the path around until you see a door that’s opened to the north. In the room beyond you’ll find Specters. Kill them and hit the second Switch. This releases the second Cyberdemon. Go back to the courtyard and deal with it.

Go through the sunken stairway and follow the rooms around to the previous Switch. The door to the west will have opened. Kill the Chaingunners and flip the Switch to release the third Cyberdemon.

Head back to the courtyard to kill it and open the door at the back of its den. Kill the Mancubus, press both Buttons to open this door and the next and then quickly run over the blood to hit the next Switch. This lifts up a few more steps to the Yellow Key and also opens the door to the next Switch.

Go through the sunken stairway and up the next stairs. A thin door will be open to the left. Follow the passage, kill the Chaingunners and flip the last Switch to release the final Cyberdemon.

Go back to the courtyard and kill the Cyberdemon. Go into the final den and open the door. Take out the Chaingunners stationed on the ledge around the room and the Revenants in the corners.

Go up the stairs to the ledge with the Chaingunners and hit the Skull Button on the left side behind the bars. Demons will spawn into this room so be ready for them.

For the one and only secret for this level go into the room that opened up to the east and lift up the section of wall with the half covered Button. This reveals a teleporter. Take the teleporter up to the ledge with the Revenant for Secret #1.

Go back to the courtyard and climb up the steps to the Yellow Key. Open the Yellow door and step on the fake Exit. When you do two rooms filled with Revenants will open up. Deal with them as best you can. I prefer to circle around and use rockets. 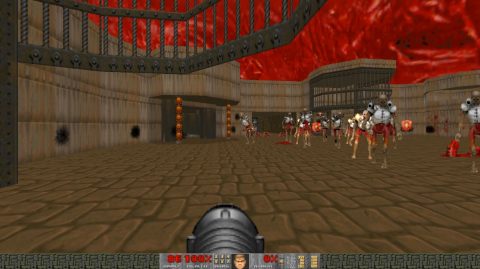 Once the Revenants have been killed press the Switch in one of the rooms that opened up and then go through the Exit on the other side of the courtyard to complete the level.