This map is very large and quite difficult. The first thing you want to do from the Start area is run around the outskirts of the complex and clear out all the Imps and Chaingunners in the ledges above.

Once that’s been done open the wooden door to the room in the south west corner. Take out the Hell Knight and other enemies and then open the wall with the black banner to the east. 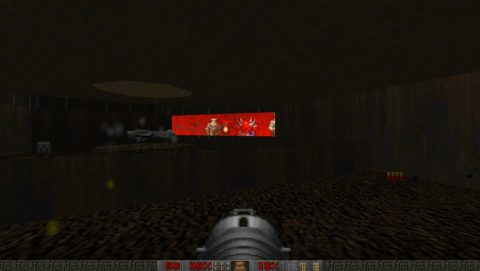 Take out the Hell Knights and Cacodemon in the other room and press on the Switch in the corner. The Switch is in the pit below on the other side of the low wall but you can press it from this side. Otherwise you’ll need to exit out the right door and through the next door and drop into the pit to hit the Switch. Once the Switch has been hit the floor will rise.

Go back to the corridor and take out the lost souls. Continue along to the north and then open the white door to the east and then north. This takes you out to the large circular room in the center.

Do a loop around, taking out all the enemies around the outskirts. You should be able to target the Hell Knights on a central pillar as well. This will save you from having to deal with them later. 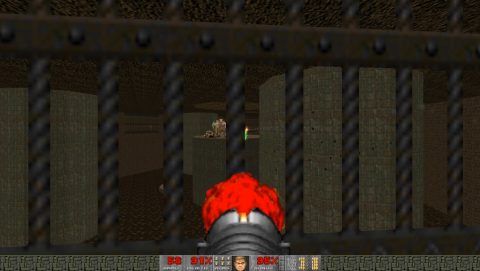 Once you’ve come back to the starting position open the wall on the south side just to the east of the entrance. This is Secret 1 and opens up the red room where you killed the Hell knights and Cacodemon. Inside you’ll find some Health.

Drop down one of the gaps and enter the circular room. The central pillar will lower down with a Berserk pack and also another pillar with the Red Key. 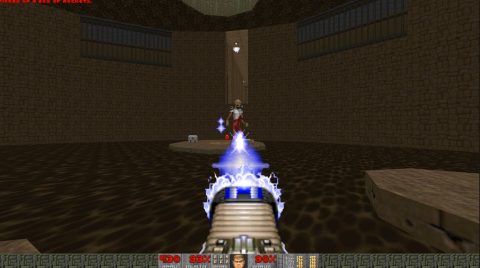 Take out the Revenant, pick up the key and then step into the teleporter. It will take you back to the first room you entered.

Leave the room and make your way around to the Red Door in the north west corner. Take out the Hell Knight and other enemies inside and the stand on the chair so you can open the window.

Climb in the window to the library. When you get close to the black banner some bookshelves will lower releasing Chaingunners. Take them out and then open the wall with the black banner.

Drop off the edge to the room below and kill all the enemies. Hunt around for Backpack and then press the Button to release the enemies behind the cage.

Press the Skull Button to open a door in the stone wall. Take out the enemies and grab the loot.

Head back to where you dropped down and stairs will appear. Climb back up and head out to the outer corridors.

Take one of the paths back to the central room and another pillar will have lowered. This one has the Yellow Key guarded by a Revenant. Grab it and go back through the teleporter.

Once you have the yellow key a section of wall will open up around the outskirts. It’s on the western side. Kill the Imps and then open the wall with the painting. 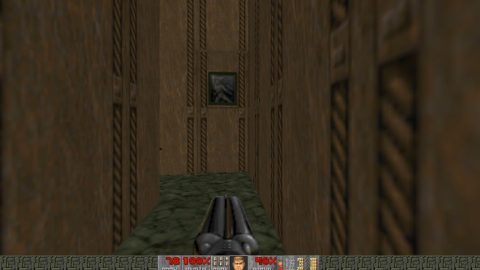 Kill the Revenant, grab the Blue Armor and head through the blue teleporter. This takes you to a cage with the Chaingunner but you can open the wall to the west.

Go back through the wall and then open the door to the slim section just next to you. Inside you’ll find two Hell knights. When you kill them and walk in one wall will lower with a Megasphere. When you grab it you’ll be teleported to a room in the south west quadrant. 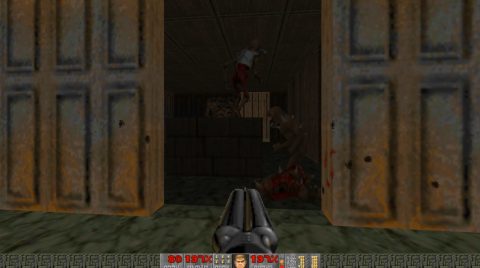 Kill all the enemies. You may be able to get the Revenant and Mancubus to fight against each other.

Head to the north east corner and open the Yellow Door. Take out the Hell Knights and other enemies and open the door to the south. Go through to the Rockets around the corner but the floor will lower to a lava room. 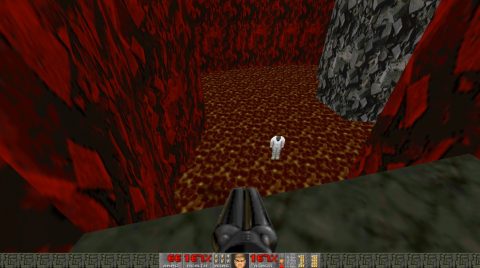 Grab the Radiation Suit and clear out the enemies. Take the lift up on the southern side but watch out for the Chaingunners up the top.

Make your way around the library but watch out for the enemies spawning in behind one of the windows.

Find the black banner on the wall and open it to go back out to the outer corridors. Any enemies you didn’t kill behind the window will teleport out to the main hallway. Finish them off and then drop back down to the central room for the Blue Key.

Go back through the teleporter one last time and go through the Blue Door in the south east corner.

When you get close to the back wall the lights will go out and the back section will open up. Walk into this section and another section will open. Drop into the pit and it will lift up. Another exit will appear on the north wall so go through.

Shoot the Button and walk around until the pillars lower. Walk close to the pillar with the Baron of Hell and that will lower as well. Step onto the teleporter to be taken to the giant room on the eastern side of the map.

To lift up the bridge to get out of this building you’ll need to press the Button on both side. Before leaving the building open the wall to the right of the exit for Secret 3 with Blue Armor.

Head outside and do a lap around to clear out all the enemies. Make sure you target the Chaingunners in the towers first. you’ll also need to deal with a Cyberdemon. 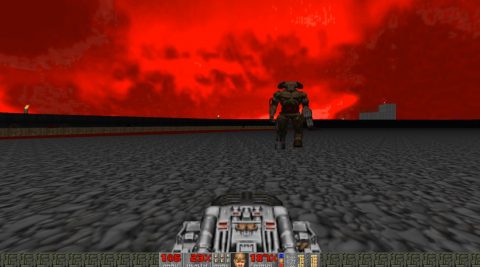 Once the enemies have been dealt with find the wall between the two blue torches and open it. Inside you’ll find an Invulnerability sphere. 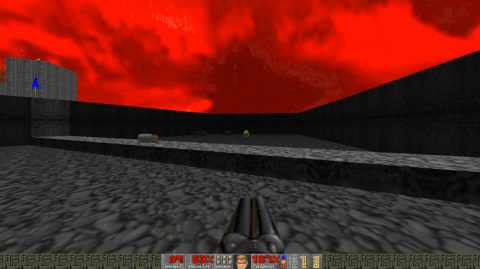 When you try to get back past the two blue torches you’ll be teleported to a hill. Drop down through the hole in the fence and you’ll tag Secret 4. Drop down to the ground level and clear out all the enemies.

Come back the way you came and the square building will lower. Inside you’ll find the Exit for this level.